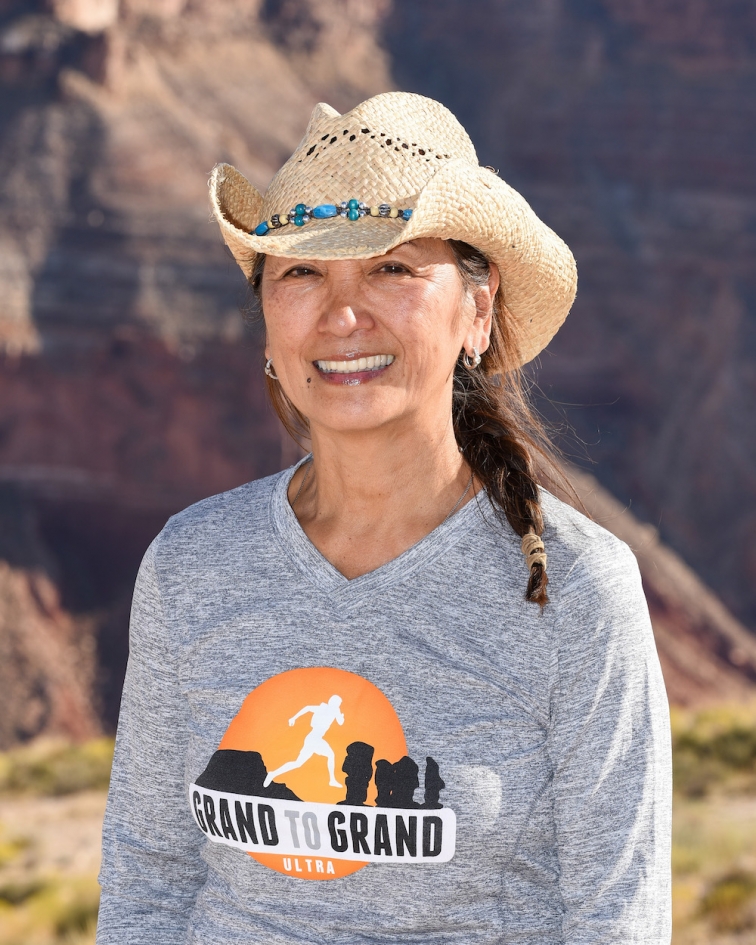 Tess is Operations and Event Director and co-founder of the Grand to Grand Ultra and the Mauna to Mauna Ultra. She is an experienced sports event organizer and ultramarathon athlete. Tess has organized and managed many high profile sporting events throughout the world in stage adventure racing, tennis and golf.

Tess is also a committed race volunteer. One of her volunteer highlights was her time spent working the alpine events at the 2010 Winter Olympics in Whistler, British Columbia.

Tess loves ultrarunning and has competed in many ultra races, including the Marathon Des Sables in Morocco, the Sahara Race in Egypt, the Atacama Crossing in Chile, the Libyan Challenge (twice), the Desafio al Desierto in Argentina, as well as races in France, the Philippines and the US. 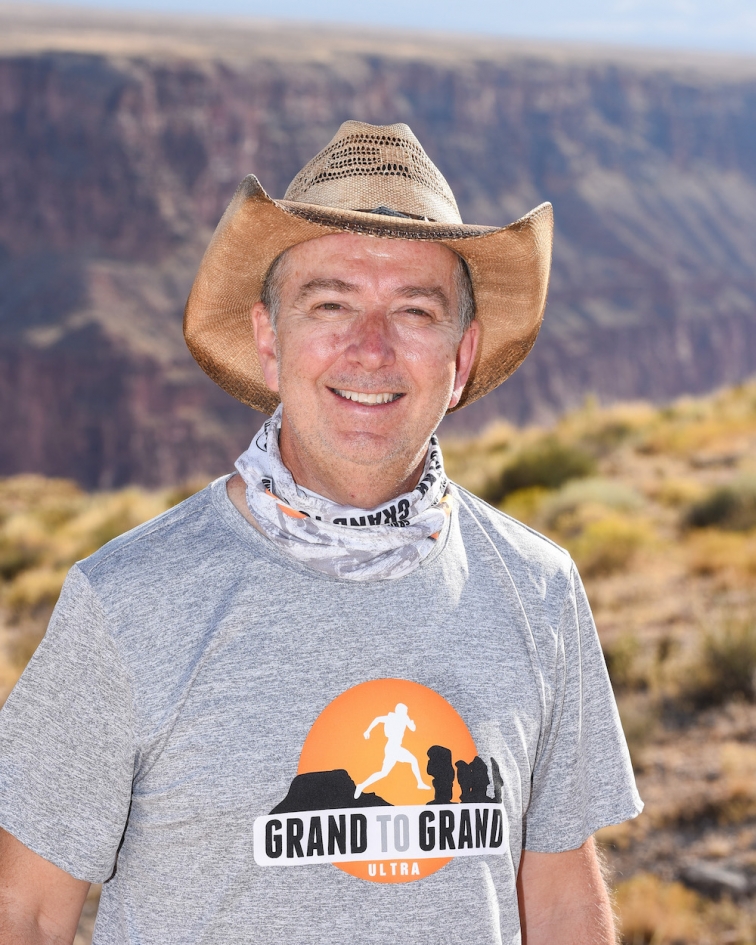 Colin is Business & Event Director and co-founder of America’s premier self-supported stage ultra-marathons, the Grand to Grand Ultra and Mauna to Mauna Ultra. With over 30 years experience in the investment banking and private equity industries, former Managing Director of Deutsche Bank and Founder and Managing Director of ABC Investment Banking, Colin has a wealth of knowledge which he brings to bear for the development of our races. Colin holds an MA Honours (Mathematics and Economics) from the University of Aberdeen and completed the International Management Program, INSEAD and Leadership Development Program, The Wharton School. He has been married to Tess for 30 years and is an avid sportsman. Colin has worked and done business in over 20 countries with much of that time spent in Asia. Colin co-founded G2G back in 2012 and has since focused on continually improving the events year after year. 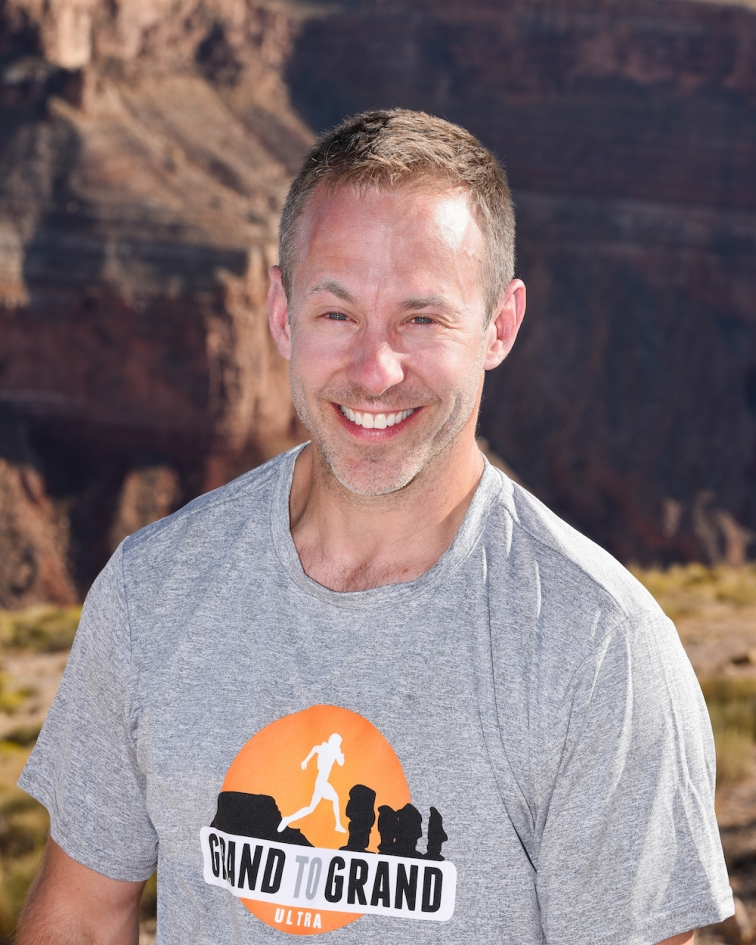 Josh is the Medical Director for the Grand to Grand Ultra and the Mauna to Mauna Ultra. He is a board-certified emergency medicine physician and the Director of EMS and Prehospital Medicine for Cambridge Health Alliance in Massachusetts.

Josh was a US Navy medic for 6 years prior to medical school. After his residency training in Philadelphia he completed a year-long fellowship in wilderness and expedition medicine at SUNY Upstate in Syracuse, NY followed by the Diploma of Tropical Medicine & Hygiene in Liverpool, UK.

He is also a Fellow of the Academy of Wilderness Medicine (FAWM). He has published in the fields of EMS and wilderness medicine and continues to be involved in resident/fellow education. Josh has worked at various expeditions and ultra-marathons such as the Southwestern US, the Amazon jungle in Brazil, Cambodia, Sri Lanka and Bhutan. He has been involved with G2G since 2013. 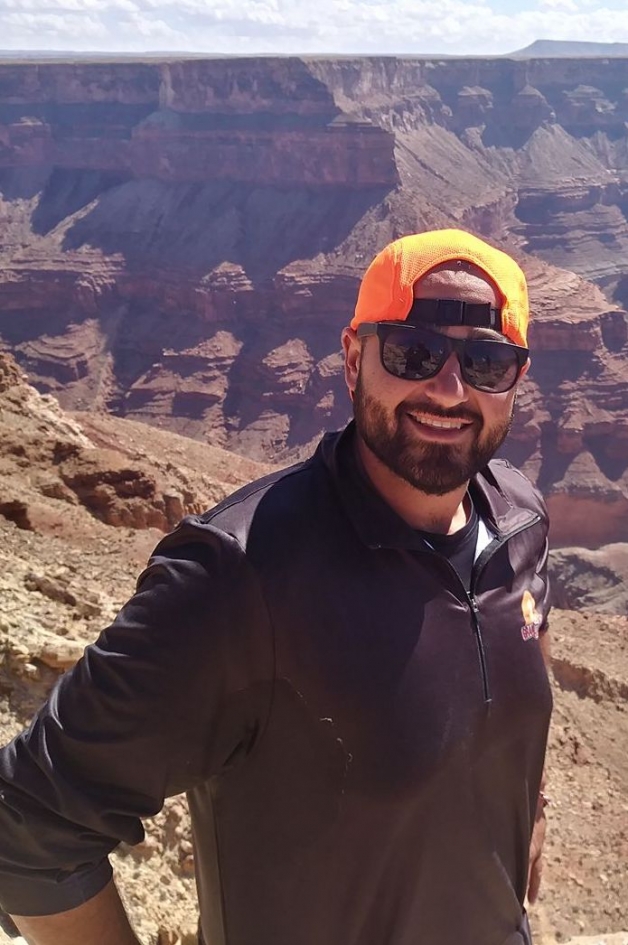 Jeremy Spircoff is the Camp Manager for the Grand to Grand Ultra and the Mauna to Mauna Ultra. Jeremy has invaluable experience of building and resourcing our camps in the desert and other wilderness locations.

Jeremy has worked at four G2G races, originally as one of the camp crew. Jeremy was then promoted to Assistant Camp Manager before becoming Camp Manager.

Jeremy grew up in Florida and moved to Colorado in 2010 for college. He is an established outdoorsman skilled in multiple outdoor activities including rafting, skiing, hiking 14ers (any mountain over 14,000 ft), mountain biking, climbing (both ice and rock) and canyoneering.

When not at G2G, Jeremy works two seasonal jobs. In the winter, he is a ski patroller at Keystone Ski Resort in Colorado. In the summer, he is a white water rafting guide on the Arkansas River, also in Colorado. 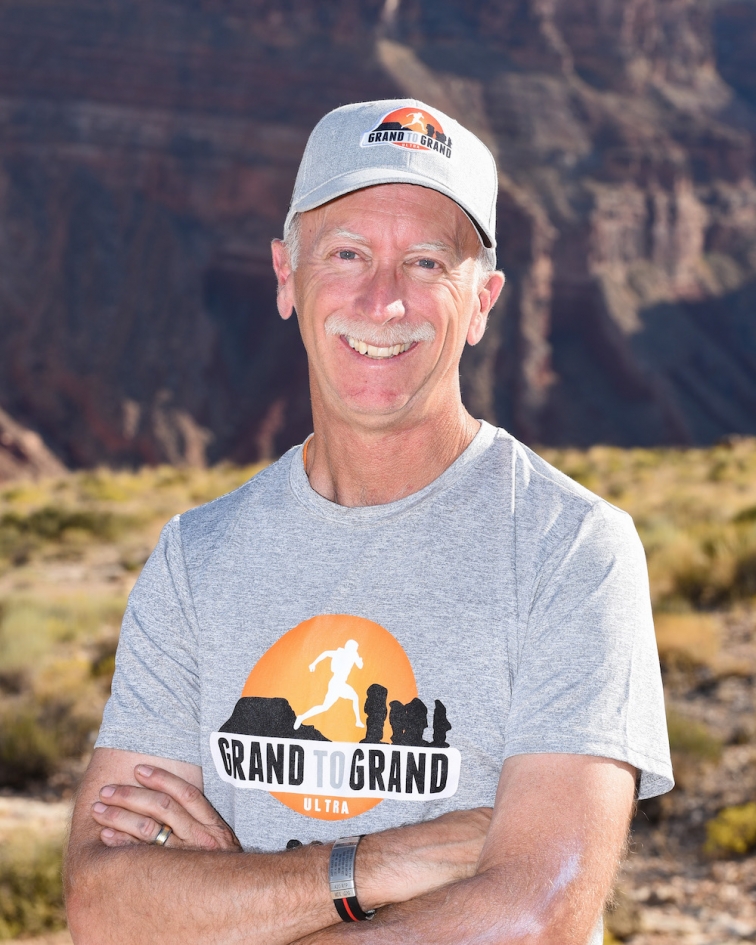 Garth is the Race Commissioner for the Grand to Grand Ultra and the Mauna to Mauna Ultra. Garth is an engineering professional from New Mexico where he manages various emergency response programs at the Los Alamos National Laboratory. Garth began his athletic endeavors at the age of eight when he took up competitive swimming.

After high school he transitioned to triathlons and bicycle racing. While raising his three girls with wife Lisa, Garth continued to keep in the game by focusing on running. This eventually led to numerous marathons, ultramarathons and stage races where he typically finishes in the top ten percent. He also has experience in orienteering, long range shooting, archery, fencing and biathlons. Some notable events he has competed in include the Marathon des Sables (twice) and Ultra Trail du Mont Blanc. 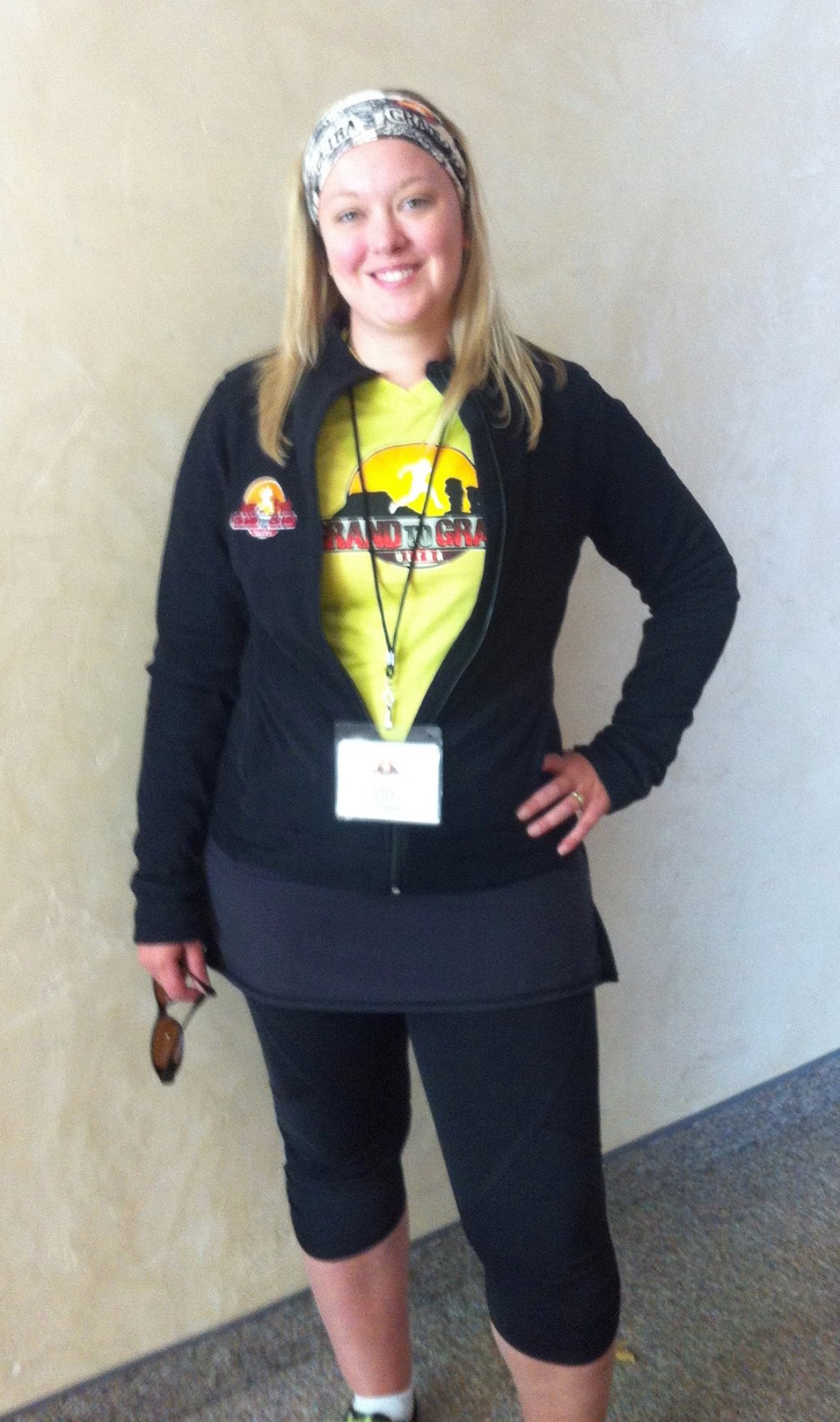 Stefanie is our Media Manager. When she is not actively involved in managing our event social media, she is a management consultant who specializes in helping real estate brokerages and small businesses flourish. 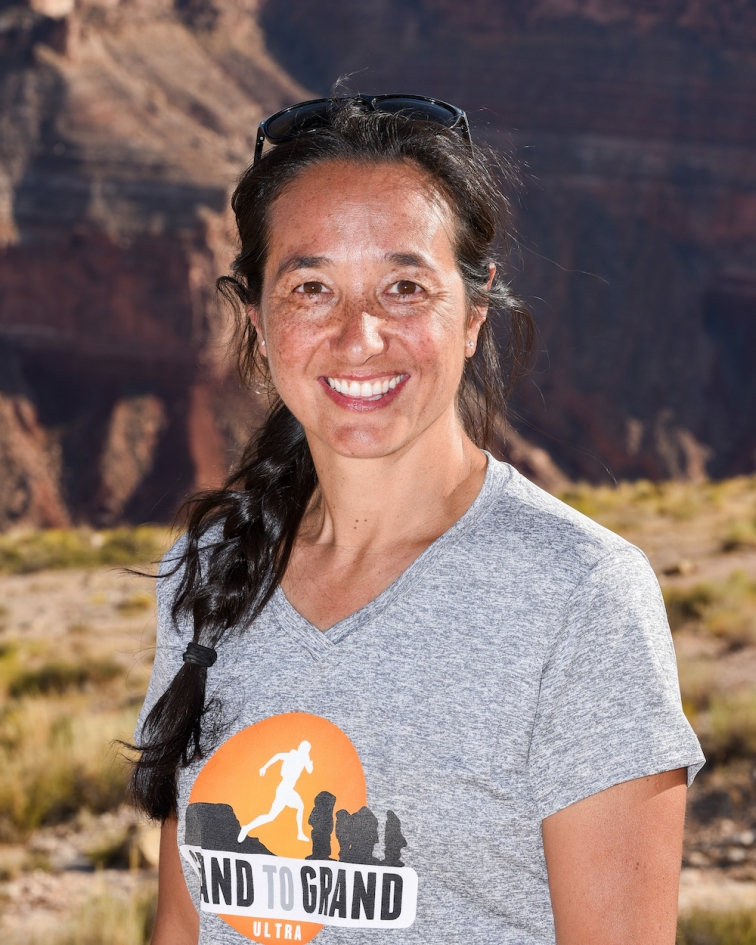 Sonia is the Volunteer Coordinator and Checkpoint Captains Leader for the Grand to Grand Ultra and the Mauna to Mauna Ultra. Having spent her formative years in Australia followed by several years in Japan working in public relations, Sonia now lives in Whistler, Canada, sharing her time between her Property Management business, her family, and enjoying life in the mountains.

She is a keen runner, having taken up the sport in 2009 and participating in countless road races. After being introduced to trails and ultra running this became her new passion, and she completed the Grand to Grand Ultra in 2013.

Since then, Sonia has been a dedicated volunteer with G2G, returning every year to be involved in the event. She loves being part of the G2G/M2M family, meeting amazing people from all walks of life, and helping them to achieve their goals. 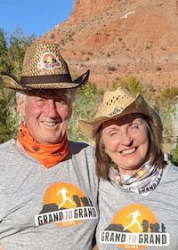 Dave Baird and Susana Young are the local coordinators for the Grand to Grand Ultra. Both Dave and Susana have been volunteers since the first G2G in 2012. Susana is a Kanab native. She and Dave moved to Kanab 11 years ago. Dave and Susana love to hike the hills and discover places that few people have had the ability to enjoy.

They both enjoy being involved with G2G because it has brought so many people from all over the world, exposing them to the beauty that Kanab has to offer. It is always a thrill to experience the runners soaking up the red hills scenery for the first time, and to support them throughout their G2G adventure.

Both Dave and Susana are involved with pre-race preparations, coordinating with landowners and suppliers. During the race, Dave has an important role evacuating DNF’s from the course and helping to get them to a safe place. Susana helps those same runners connect to their luggage, find them a place to stay and arrange transportation home. Dave is a retired captain from American Airlines and many G2G competitors over the years have been flown by Dave in his private plane around the area. Susana is retired from Sprint Telecommunications.